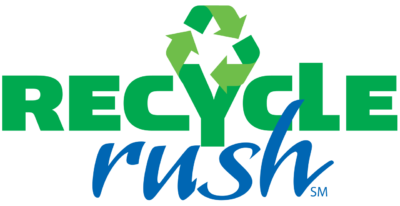 RECYCLE RUSH is a recycling-themed game played by two Alliances of three robots each. Robots score points by stacking totes on scoring platforms, capping those stacks with recycling containers, and properly disposing of pool noodles, representing litter. In keeping with the recycling theme of the game, all game pieces used are reusable or recyclable by teams in their home locations or by FIRST® at the end of the season.

Each Alliance competes on their respective 26 ft. by 27 ft. side of the playing field. Each match begins with a 15-second Autonomous Period in which robots operate independently of their drivers. During this period, robots attempt to earn points by moving themselves, their yellow totes, and their recycling containers into the area between the scoring platforms, called the Auto Zone.

During the remaining two minutes and 15 seconds of the match, called the Teleop Period, robots are controlled remotely by student drivers located behind the walls at the ends of the field. Teams on an Alliance work together to place as many totes on their white scoring platforms as possible. Alliances earn additional points for recycling containers placed on the scored totes, with containers at greater height earning more points.

Alliances also earn points for disposing of their litter in their Landfill Zone near the center of the field, or placing litter in or on scored recycling containers. Alliances that leave litter unprocessed on their side of the field at the end of the match, not in scoring position, will add points to the score of the other Alliance.

This website uses cookies to improve your experience while you navigate through the website. Out of these, the cookies that are categorized as necessary are stored on your browser as they are essential for the working of basic functionalities of the website. We also use third-party cookies that help us analyze and understand how you use this website. These cookies will be stored in your browser only with your consent. You also have the option to opt-out of these cookies. But opting out of some of these cookies may affect your browsing experience.
Necessary Always Enabled
Necessary cookies are absolutely essential for the website to function properly. This category only includes cookies that ensures basic functionalities and security features of the website. These cookies do not store any personal information.
Non-necessary
Any cookies that may not be particularly necessary for the website to function and is used specifically to collect user personal data via analytics, ads, other embedded contents are termed as non-necessary cookies. It is mandatory to procure user consent prior to running these cookies on your website.
SAVE & ACCEPT